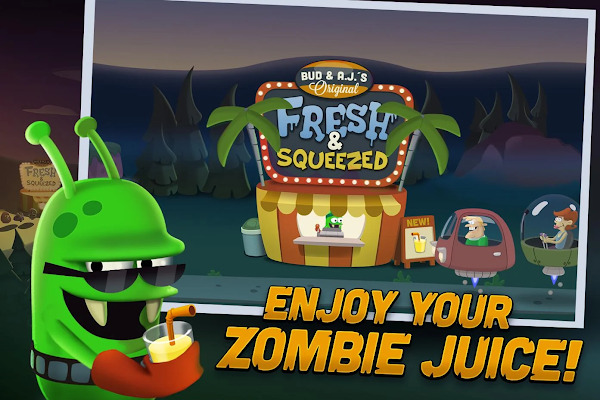 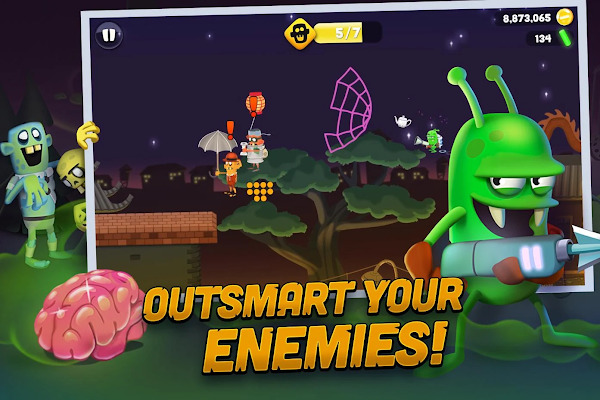 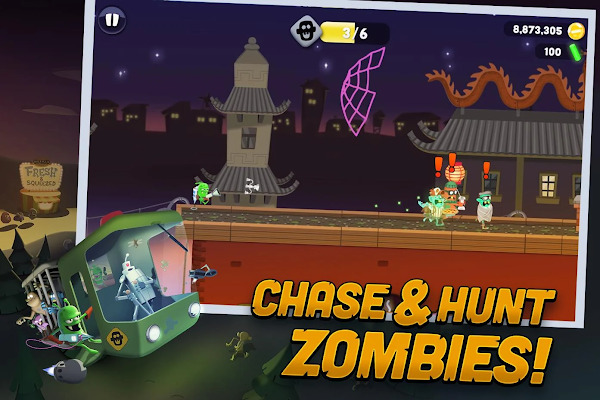 Zombie Catchers APK 2023 plays like a classic 2-D side-scroller game with surprisingly good mechanics, including a rewarding leveling system. It’s not a typical shooter where you blast every zombie you come across; no, the game requires precision and patience.

Zombie Catchers APK free also teaches you how to capture zombies. After the tutorial stage, the game reveals about leveling up and the minimum number of captured zombies required for it.

Our playable character is a green-skinned alien shaped like a pickle, and we are armed with a harpoon, the default weapon. Equipment-wise we have a jetpack that we use to propel our character back and forth in our endless quest to capture zombies.

The opening cutscene of Zombie Catchers APK Android shows our green-skinned protagonist and his sentient robot companion crash land on a planet where the zombies are at large. Here, we embark on our quest through a chance encounter with a citizen and a zombie.

The zombies aren’t feared on this planet, and our alien protagonist schemes to use zombies to extract their brain fluid. This extracted goo is used in sodas that the general populace consumes and gives a source of income to repair the spaceship.

We get paid after capturing zombies, and little nuggets of the story are revealed between conversations between our protagonist and robot companion. Zombie Catchers APK is a fun experience that will get you hooked from the very start and keep you interested in it.

How to Play Zombie Catcher APK

Exciting Features to Lookout For In Zombie Catchers APK

Zombie Catchers APK has a ton of exciting features to explore. Here are some of the best ones that really made a great impression on us.

The environment of Zombie Catchers APK is a swamp where the zombies lie underneath. The game has a vast area, and each stage covers a different section of the swamp. Curious-eyed players will notice the spaceship being used to capture zombies hovering in the background.

There’s a lot of attention to detail, and the art style meshes well with the gameplay. The design of the harpoon gun and jetpack, as well as the zombies we capture, all fit in thematically and create a unique visual experience.

Zombie Catchers APK will enrapture the players with its satisfying gameplay. The zombies get progressively faster with each stage, and the barrel ones especially will deflect hits from the harpoon gun, so you have to give chase and keep pursuing until the target is captured.

The jetpack will also come into play quite often, as you will be rushing the harpoon-totting alien from one end of the swamp to another to catch the fleeing zombie. There will also be obstacles, like the high ground, which you’ll have to glide or jump over using the jetpack.

The gameplay of Zombie Catchers may seem simple on the surface, but once you start playing and leveling up, the depth of the upgrade system becomes apparent. You have to wisely spend your money from capturing zombies to improve your skills.

The different zombies, which are relatively rarer than the normal ones, will provide you with different upgrades and more money. Some of the upgrades include faster movement by jetpack, increased damage against zombies wearing protection, and faster recharge of the harpoon gun.

Zombie Catchers APK has one hell of a hook that draws you in. Here are a few tips to make you a pro at the game.

Zombie Catchers APK will be more fun for those who master the gliding mechanic early on. If you want to achieve a higher score in the different stages, it is recommended to practice gliding and get good at it quickly.

It can be quite tempting to go for extra damage in the beginning stages of Zombie Catcher APK. If you upgrade speed first, you will cover the damage output upgrade in no time as you continue to play the game, so go for speed rather than damage upgrade first initially.

Use the Charge Button for the Harpoon Gun

The charge button of the harpoon gun amplifies the damage output; most regular zombies will get one shot through this. The zombies with protection will require multiple shots of the fully charged harpoon, so practice with the charge button pressed during the zombie chases.

I had a blast going through Zombie Catchers APK, and the game gets a massive thumbs up from my end. The game will appeal to casual and pro gamers alike, and it has earned its praise; I highly recommend checking it out.