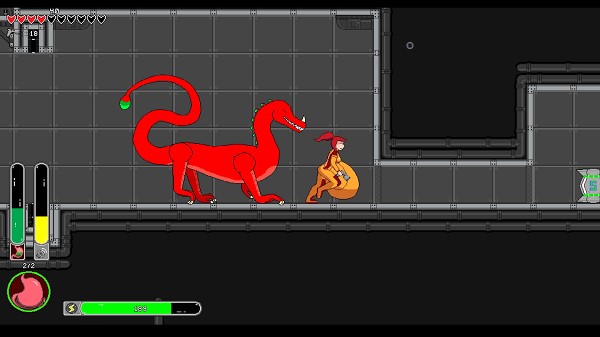 Project GLUTT APK: Defeat Your Enemies With A Voracious Twist

Project GLUTT APK free download is a platforming game where you control an escapee science experiment that has taken the form of a female humanoid. Her method of escaping? Eat anyone or anything that stands in her way, after stunning them with her taser gun.

Project GLUTT APK for Android introduces a clever mechanic of devouring the enemies, where there’s a limit placed on your consumption. You can only swallow one human at a time, and after consuming one, you have to play a mini-game and tap repetitively to digest.

During the consumption, the main character’s stomach enlarges, and there is a subtle facial expression on her face, as the digestion is taking place until she burps loudly. The bones of the eaten enemy are spat out, which rolls off-screen, a humorous and dark implication but fun nonetheless.

Project GLUTT APK latest version has been updated to include a fair bit of story to the game. The premise explains our protagonist is a science experiment who is trying to escape her fate of being a lab rat, the only problem is that the scientists and guards are trying to stop her.

Oh and there’s also the problem of aliens being thrown into the mix for making the escape attempt even more difficult, add to all of that the fact that we’re on a spaceship in space! Things get even more complicated.

How to Play Project GLUTT APK?

Exciting Features of Project GLUTT APK to Lookout For

Project GLUTT has a ton of features that we’ll go over;

The main appeal of Project GLUTT APK is how the heroine survives by eating her enemies. The consumption mechanic is a truly unique way to make the game a challenge, because in the beginning you can only eat one enemy at a time.

The mini-game also appears as you spam the action button; the hilarious animation of the heroine tapping her bloated belly plays out as she angrily smacks herself until the digestion is complete. If you fail the mini-game, the enemy bursts out, but you can still eat them again.

Another component of Project GLUTT APK that makes it stand out is the ability of the main character to perform a double jump at any time after the initial jump. The jump ability is put to great use for creating different platforming sections that are hard to land if you’re not practicing.

The game evens things out by having rewards hidden behind hard-to-reach areas that require precision button timing, and hand eye coordination to execute. The rewards offer boosts that make the game somewhat easier, and you take any advantage you can get in hard games.

Project GLUTT APK has many dangers lurking around every corner, but we’ll share some useful advice to help you out.

This is a bit on the nose, but when you’re playing Project GLUTT APK, it’s best to not try to consume everything you see. The reason for not going after everything from the start is that you’ll have a hard time as you could get overwhelmed by enemies during the digestion period.

If you want to be good at the game, you should consider practicing the jumping mechanic and exploring the different areas. The game will not hold your hand and spoon feed you when it comes to rewards, so get good if you want those goodies.

Project GLUTT APK has an amazing concept behind it, and what’s even more mind-boggling is that the developer is just one person. The gameplay has improved since its first BETA release, and with constant improvements, this is a hidden gem that’s definitely worth your time.

I encourage you all to support the developer and check out the game for yourself, and it’s an easy recommendation for others, especially the ones looking for something different to play.