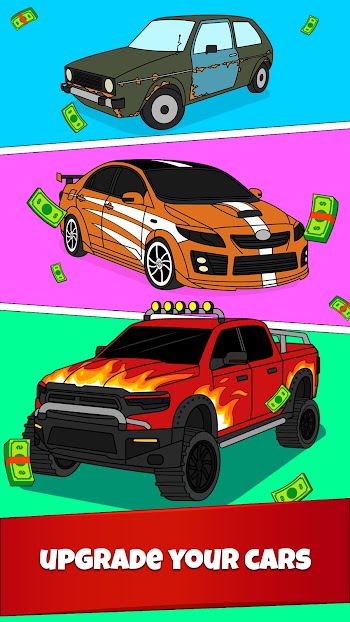 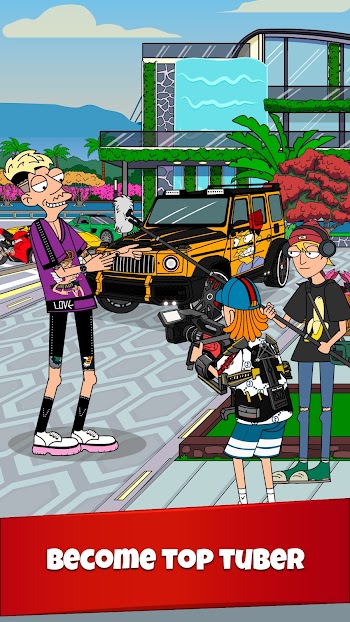 Lamar - Idle Vlogger APK 2023 is a parody life simulator that cranks up the humor to 11 right from the get-go and makes you the star of an underdog story. We play the role of Lamar, a down-on-his-luck average joe looking to improve his current situation.

The gameplay elements of Lamar - Idle Vlogger APK Android mostly revolve around recording videos, working to improve the equipment and furniture of a house, and making money. The leveling system is full of variety, and your choices will help shape Lamar’s future.

We get introduced to a couple of characters who provide mostly foil for our hero Lamar to bounce dialogue off of and the occasional help from them down the road. After thinking of vlogging and borrowing a phone, Lamar – Idle Vlogger APK officially kicks off.

As the name of the title suggests, the main goal of Lamar – Idle Vlogger APK is to make a lot of money for our character. The expenses are many at the beginning of the game; we make mediocre videos but slowly improve quality by allocating our earned money to different things.

The cutscenes that trigger as we approach certain portions of completion of our main objective help further push the narrative, but they mostly introduce new characters. Lamar’s lifestyle improves or remains the same depending on how well you play and make his decisions.

Exciting Features to Lookout For In Lamar- Idle Vlogger APK

Lamar – Idle Vlogger APK has many exciting features, and we’ll review the ones that deserve the praise.

The writing of Lamar – Idle Vlogger APK is the game’s main strength. The hilarious and witty comments passed by Lamar and the NPCs around him make the game very enjoyable.

Whether it's poking fun at each other back and forth or Lamar’s inner monologue, you’ll be giggling non-stop. The dialogue will reflect Lamar’s state of mind and sometimes may contain hints about what to do or where to go next.

Combined with the snappy dialogue, the over-the-top animations and special effects in Lamar – Idle Vlogger APK are side-splittingly funny. A simple example is the boost of money generated per second granted randomly, the music kicks up, and Lamar’s body language becomes radical.

Similarly, these random things happen at the oddest times, making players seek it out and continue playing. Lamar – Idle Vlogger APK also has funny facial animations for Lamar, irritated or downright furious, and thrashes things around him.

A major milestone for Lamar – Idle Vlogger APK for its engaging gameplay is its upgrade system and multiple customization options. The game seemingly looks simple, but it has a lot of depth and detail in its cosmetic changes, reflecting the developer’s vision.

As you continue to make money for Lamar, you can unlock new costumes and accessories. Lamar’s skills also play a vital role in making his money generated per second stat raise; charisma makes the audience like Lamar more, and his clothing attracts viewers' donations.

Improve Quality of Life For Lamar

In Lamar – Idle Vlogger APK, the progress you make will allow you to purchase and have different quality of life improvements for our protagonist. From living in a pigsty to a luxurious mansion and driving a broken-down van to a sports car, you can control Lamar’s fortune.

The clothes Lamar will wear in Lamar – Idle Vlogger APK will also showcase his level of poverty or wealth. Ideally, the better equipment, clothing, accessories, and skills you have for Lamar, the more money he will make, and he will have different choices for purchasing luxurious items.

Lamar – Idle Vlogger APK has so many things happening in the game that it can be overwhelming for new players to figure things out. We’ve got some tips to help you out.

While it can be tempting to check out the other paths Lamar can pursue in a career in Lamar – Idle Vlogger APK, it's better to focus your efforts on the Vlogging aspect. Lamar's main bread and butter will be Vlogging, which earns the most money and is the intended way to play.

Lamar – Idle Vlogger APK is a game that features ads that boost Lamar's earnings. While the grinding isn’t as tedious as in most games, the ads help Lamar’s income by providing random income multipliers, which can help you save up for the next upgrade, so watch ads.

Initially, Lamar will be doing a day job, and Vlogging will be a side thing in Lamar – Idle Vlogger APK. You can supplement the income by being organized by dividing Lamar’s time between the day job and V-logging, with a gradual focus shifting towards the latter.

Lamar – Idle Vlogger APK is a fun time with lots of funny bits sprinkled to keep you invested in the game. I highly recommend the game to everyone.